FLIES OF THE GMUNDNER TRAUN - NATURALS AND ARTIFICIALS 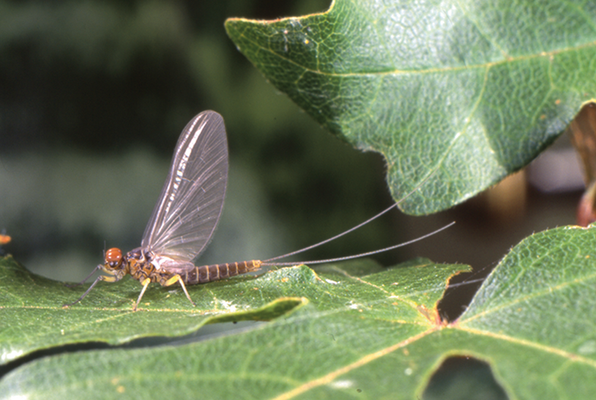 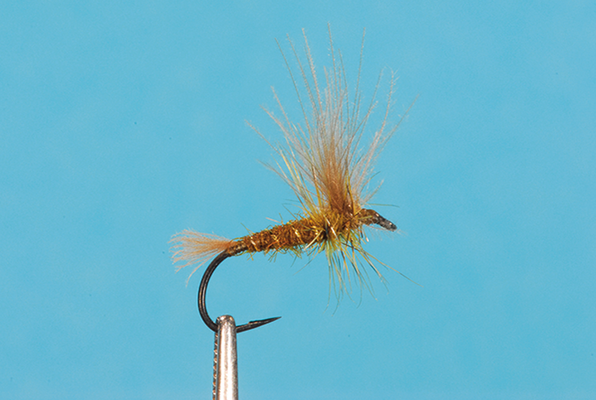 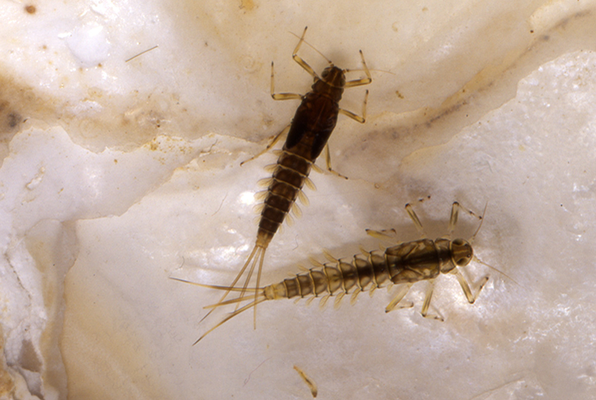 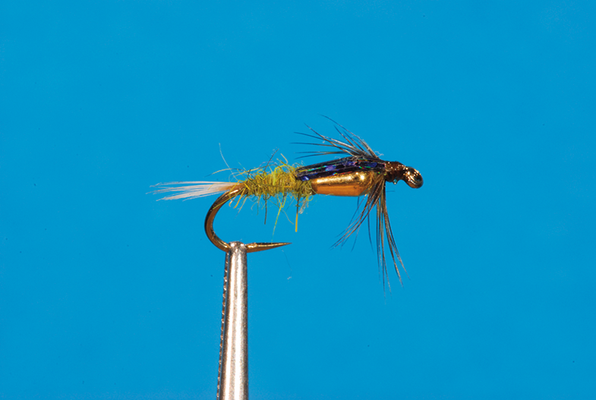 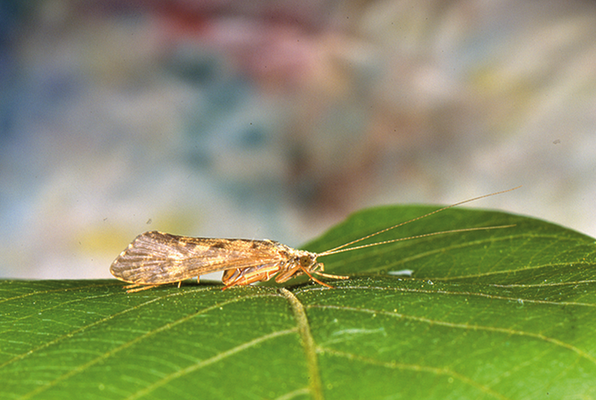 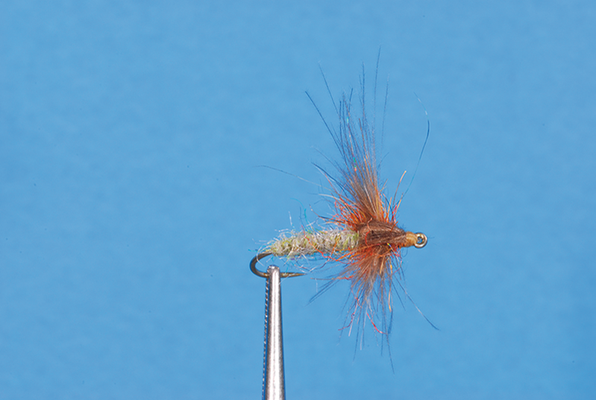 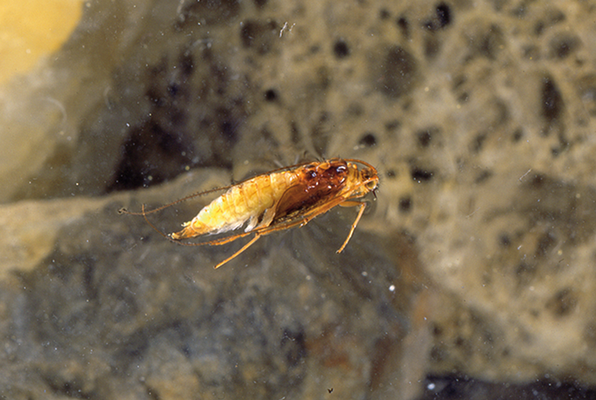 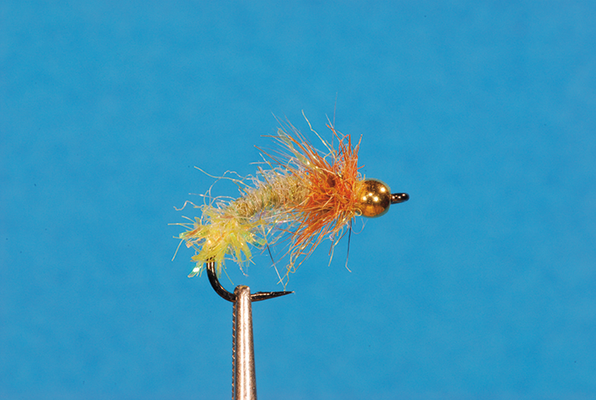 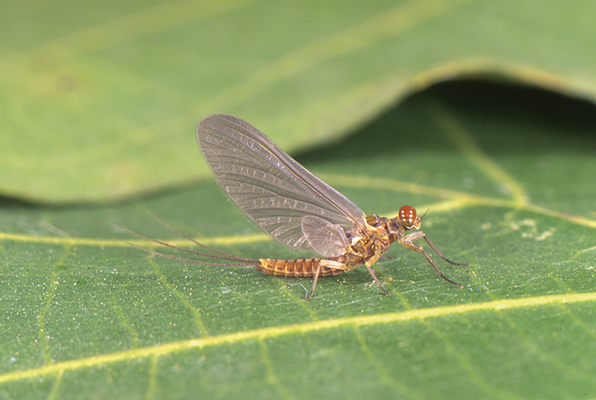 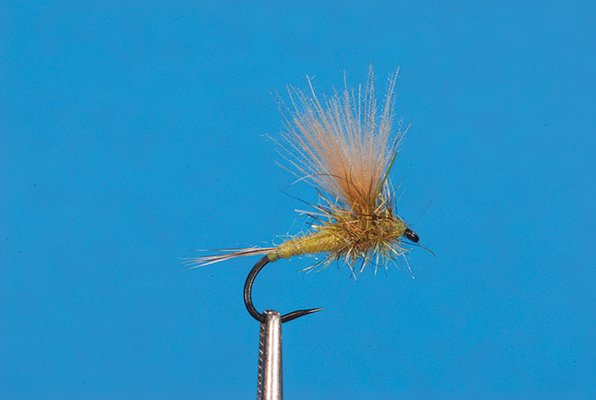 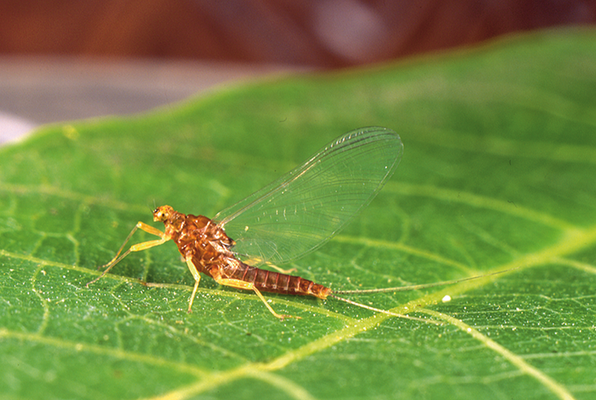 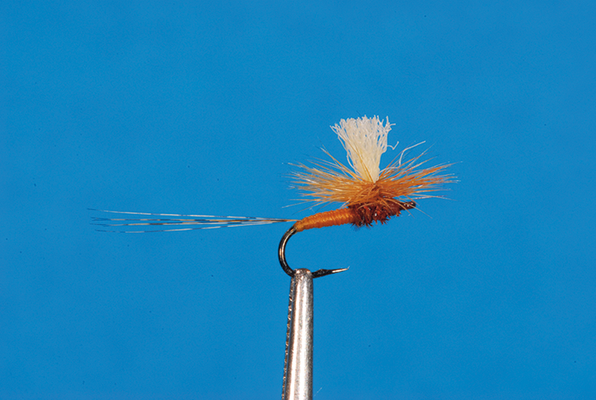 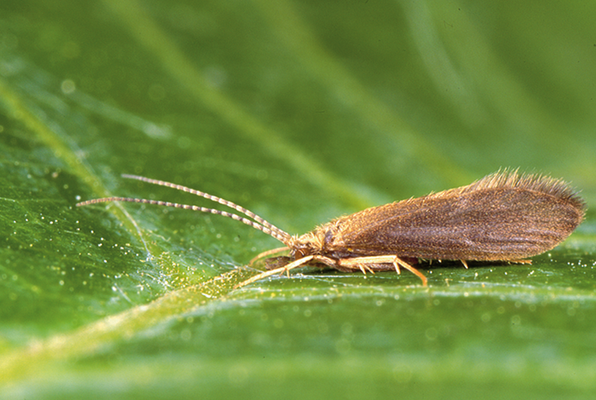 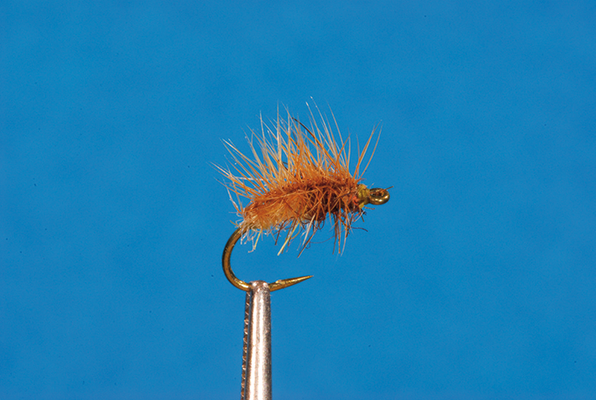 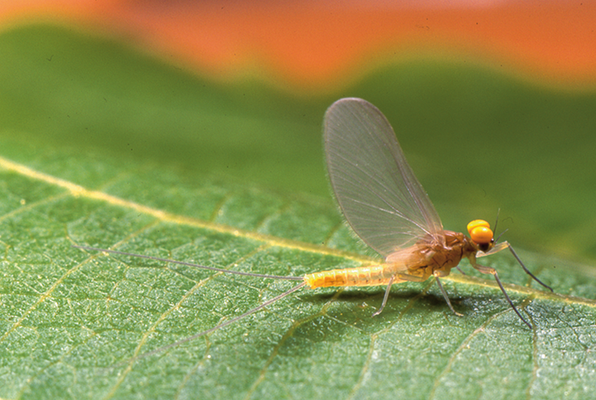 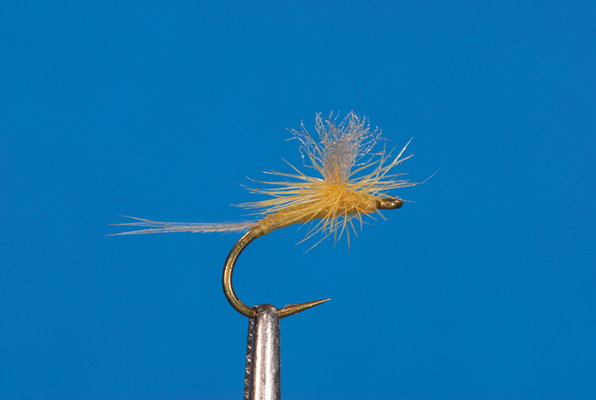 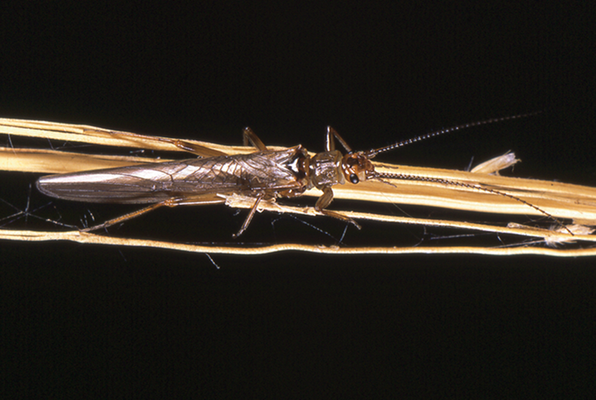 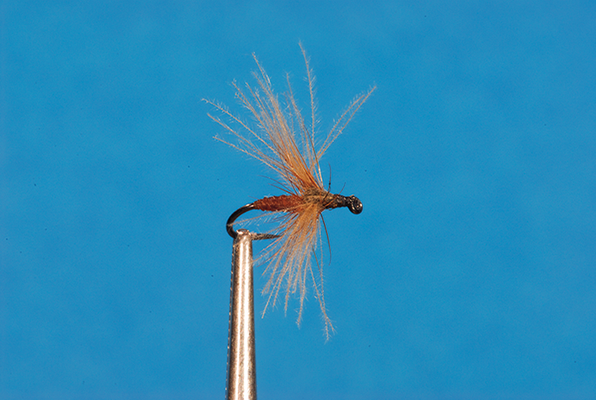 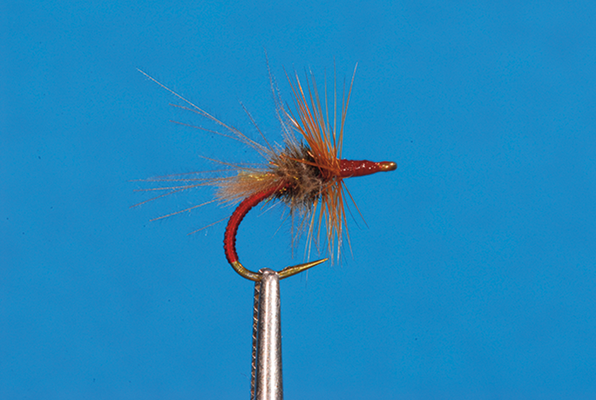 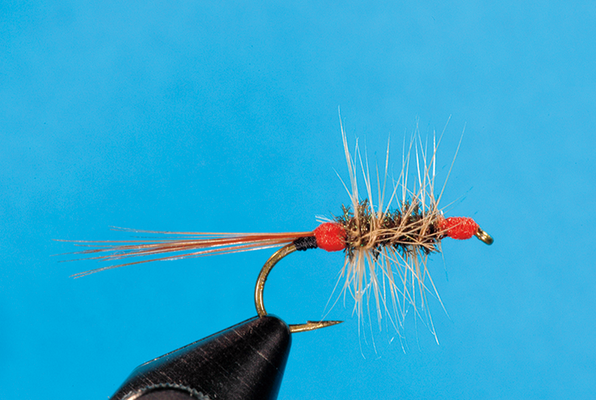 In spring, the most important fly is without doubt the Olive Dun (Baetis rhodani). In April, at the beginning of the season, artificials resembling this fly are used most often on the Gmundner Traun. Some closely related forms belonging likewise to the baetid family can easily be imitated with the same patterns in slightly different colour combinations. Baetis rhodani develops a second generation in autumn, which is somewhat smaller and has a decidedly darker colouring. A rather imitative approach is sometimes advisable, although presentation may be regarded as the very first condition for success.
Emerger and dun patterns are usually tied on hooks size 12 or 14, in autumn sizes 14 to 18 are considered more appropriate. Spinner imitations are less important during spring, but in autumn Red spinner may be numerous and may offer superior fishing in the late afternoon. In May and June hatches of Olive Upright (Rhithrogena semicolorata) are prolific. Almost any light coloured dun pattern can be used to imitate the Olive Duns. But the Olive Upright emerges exclusively under water and therefore wet flies instead of emerger patterns represent the correct imitation (especially when the artificial fly is rising at the end of the drift). For wet flies mostly hook sizes of 10 to 14 are used. The so called False (or Late) March Brown (Ecdyonurus venosus) is common from May onwards for some weeks. In the late afternoon, one can observe huge swarms of males dancing above the water. Palmer style dun patterns or Klinkhamer flies in greyish yellow with red ripping and tied on hooks size 10 - 12 are often considered particularly good imitations.

From May onwards one can see an increasing number of caddis flies swarming over the water. Their importance for fly fishing sets in soon after the snowmelt has ceased and the water has cleared up again. At the end of May, when the days grow and the water temperature is going slightly up, more and more larvae begin to pupate, which will eventually emerge after two to three weeks pupation. From the middle of June to late summer, caddis fly imitations are usually superior over most other patterns. The most important natural caddis flies on the Gmundner Traun are three species of Hydropsyche, and the considerably smaller Little Sister Sedge (Cheumatopsyche lepida), which belongs to the same family (Hydropsychidae, caseless caddis). The most famous and most frequently used artificial caddis pattern is surely the Buck Caddis and it’s variants. However, emerger patterns, ascending and swimming pupa patterns as well as delta wing caddis, mostly on hook size 10 or 14, are often equally successful.
From the middle of summer onwards Hydropsychidae become less and less dominant and are therefore of less significance for the fly fishing as before, but remain occasionally important until the beginning of autumn. Different forms of caddis, the typical Longhorns (family Leptoceridae) appear in large numbers occasionally, and CDC-flies size 14 down to 18 are then successful. Several other small caddis have their yearly period of flight around this time. Most important on the Gmundner Traun are the Small Yellow Sedge (Psychomyia pusilla) and the Dark Spotted Sedge (Polycentropus flavomaculatus). Accordingly coloured emerger patterns and small swimming pupa imitations on hook size 16 will match the hatch perfectly, presented either in free drift or downstream and across.

Additionally occurs the Blue Winged Olive (BWO) in huge numbers, arguably the most important fly for the summer months among Ephemerids, which offers excellent fishing in the dun and spinner stage as well (Sherry Spinner). In some years the genuine Mayfly (Ephemera danica) hatches in considerable numbers, and the fisherman is well-advised to have an appropriate pattern in his fly box. Midges also turn up in great numbers and rainbow trout sometimes concentrate exclusively on these minute flies, taking only very small midge imitations size 20 and smaller.
Towards the end of summer and throughout autumn an increasing number of limnephilid caddis flies, viz. Caperer (Halesus species) and the Large Cinnamon Sedge (Potamophylax cingulatus) can be observed. Pupa patterns are generally considered good imitations, both subsurface and swimming, and tied on hooks size 8 to 10.
The approaching end of the season finds various small mayfly species dominating, such as the autumn generation of the Olive Dun (Baetis rhodani) and the considerably lighter and smaller Pale Watery Dun (Baetis fuscatus). Accordingly small dun patterns and emerger size 16 and 18 are useful, but fine tippets are necessary for perfect presentation. Needle flies (Leuctra sp.), representing the single stone fly species of significance for the Gmundner Traun, may also be selectively taken by fish on cold days in autumn.